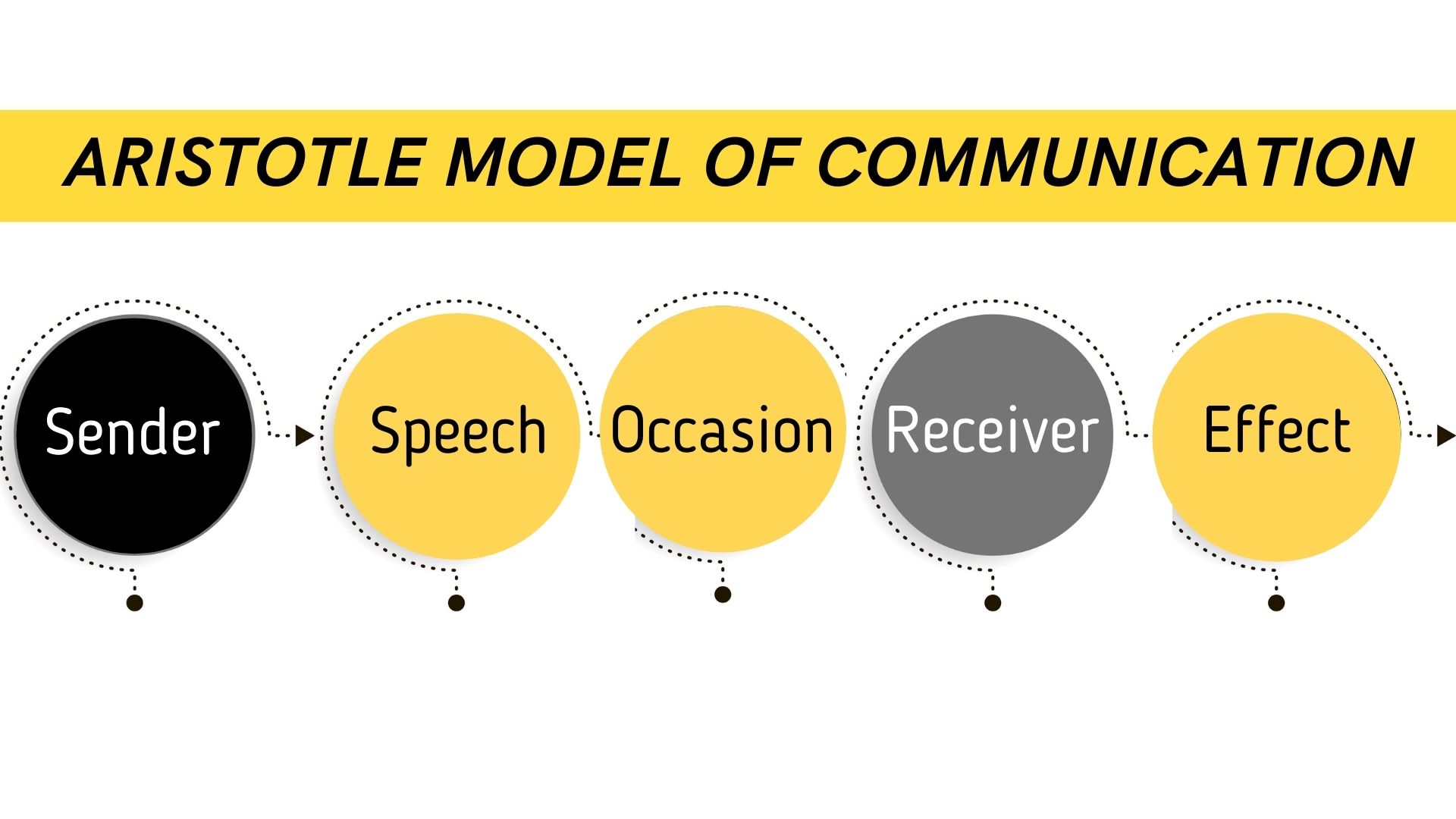 Hence, as per this model, a communication process is divided into 5 primary elements- speaker, speech, occasion, audience, and effect. Let us dive deeper and understand their roles more comprehensively-

What is Aristotle Model of Communication?

Aristotle Model of Communication is regarded as the first known model in the communication sector.

According to the Greek philosopher Aristotle, the Aristotle Model of Communication is the best way to communicate. According to several studies, it is shown that Aristotle was among the first men who initiated communication models. The model is expected to be proposed before 300 B.C.

Moreover, the model is entirely based on public speaking skills rather than interpersonal communication. Therefore, it is quite crucial from the communication point of aspect. The model is instrumental in the current generation, where businesses are growing at a rapid pace.

Alexander the great’s teacher, a Greek philosopher and writer Aristotle born in Stagira Nort Greece developed one of the first linear communication models before 300 B.C. And that is known as Aristotle’s model of communication.

The main focus of this model is the speaker and speech. According to Aristotle, ‘ Rhetoric’ is deemed as the study of communication. Aristotle also believed that messages should vary according to the audiences and situation to communicate effectively.

The speaker is considered to be the main element in the entire model, as Aristotle suggests that the audience is passive that generally gets influenced by the speech. Therefore, the Aristotle Model of Communication is also referred to as Speaker-Oriented Model. The main concept is to channelize the information from one side to another. The five elements in the model are-

There is no doubt that the speaker is the only source in the Aristotle Model of Communication. This means that any information will originate directly from the user. All the remaining elements will not produce any changes to the components of the message.

Therefore, the speaker plays a major role in delivering the context to the other communication end. For instance, the speaker must influence the audience or listeners of the speech. The public speaking process involves generating information that is further conveyed to different sections. Hence, the speaker should be aware of everything related to the topic.

Speech refers to the information that the speaker passes on to the audience. This involves the accuracy of facts and figures that are a part of the speech. It is essential to keep the speech accurate and correct as per the latest knowledge. Any misconduct can backfire on the speaker itself. Moreover, the way of delivering the speech also plays a significant role.

The language is chosen according to the audience so that they can interpret the speech easily. In case the words have different meanings with the speech context, the speaker must clarify them to avoid misunderstanding. Also, the speech should be able to communicate the exact message that the speaker wants.

The speaker must deliver a context that is relatable to the occasion. For instance, a bold and motivational speaker will be much appreciated during a time of crisis. However, the speech should include politeness when there is some loss or death. Hence, the occasion will have a huge impact on the overall effect on the speech. It is better to apprehend the occasion or situation while preparing the context and other details.

It is quite common for the speakers to keep a regular check on the audience’s interests who are listening to the speech. The audience will determine the type of information that the speaker will put forward. Moreover, the advisable technique is to understand the needs of the target audience. This will improve the understanding level and deliver the best results in the end.

For example, it would be not very helpful to talk about politics before school-going children. Moreover, the language barrier should be avoided as there should be a common platform for the speaker and the audience. Thus, several factors will determine the most suitable audience for the speech.

Last but not least, communication should be effective in terms of delivering the speech. Aristotle was aware of this element and thus included it in his model. The entire communication will be of no use until the audience is convinced. If there is no conclusion or moral of the communication, the audience will not be affected.

Suppose a politician is delivering a speech to gather votes in his constituency. He should prepare his speech to only speak about his positive aspects to gain trust. However, it will depend on his way of speaking that whether the audience is convinced or not. In case the speaker is unable to deliver a strong message, the votes will not increase. Thus, there should be proper channeling of a message from the speaker to the receiver,

Critical Elements Of A Good Communicator

Aristotle believed that to become a good communicator or speaker; one needs to possess three elements. These three elements are not only related to each other, but they are also capable of reinforcing the other elements.

Ethos is referred to as an attribute that makes a speaker sound credible in front of the audience. The audience won’t believe or be moved by a speech if the speaker doesn’t possess credibility. For example, people will be more moved by the promises of a genuine politician who indulges in good deeds than the promises made by a corrupt politician. Credibility can be gained by both expertise and position.

Pathos is all about connecting with the audience through capturing their attention and interests. If audiences can relate and feel connected with what the speaker is talking about, then speakers can somewhat stimulate the emotions of audiences. And this leads the audiences to consider the speaker as one of their own. For example, in a village where there is a water crisis, a politician would be able to connect with more audiences by promising solutions for the water crisis rather than making promises for building roads.

Logos stands for logic. The audience will be attracted to the speech of a speaker that sounds rational and contains logic.

Criticisms of Aristotle’s Model of Communication

The Aristotle Model of Communication is improving the overall communication level. However, some drawbacks are present in the model that can become a huge issue in some situations. It is better to realize these holes to prevent any miss conduct during public speaking. They are,

It is clear now that the Aristotle model is mainly focused on the speaker’s ability to organize and prepare his/her speech beforehand as per the target audience and occasion to create a specific kind of effect.

How effective do you find the role of these 5 elements in public speaking? Share your opinion with us in the comment section below.