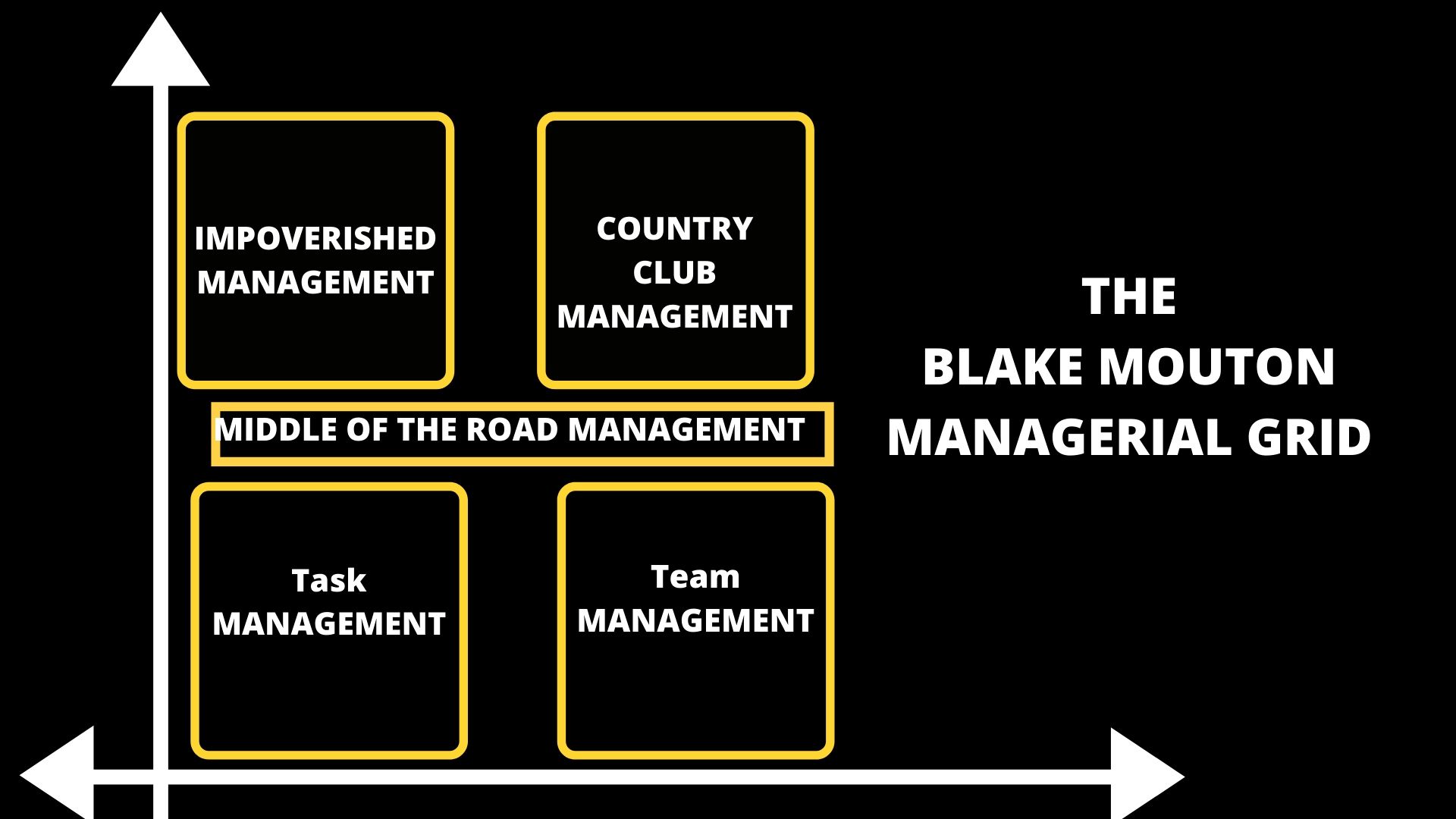 Blake Mouton Managerial Grid was developed by Robert Blake and Jane Mouton in 1964. It is also known as the leadership grid or managerial grid. This model identifies different leadership styles based on the concern of the manager for people and production.

Concern for people: this is the degree to which the leader takes into consideration the needs of his people, areas of development, etc. when deciding how a task is accomplished best.

Following are five different types of leadership styles as defined by Blake and Mouton:

The grid is graphically drawn in a 9 x 9 square. On the X-axis, there is a concern for production right from 1 to 9, 1 being a low concern, and 9 being very high and on the Y-axis is a concern for people starting from 1 to 9, one being low and nine being the highest. Different points are plotted for different managerial types, which are represented on the grid.

Following are five different leadership styles which result from this graph:

Impoverished management is the combination of both one and one on the X and Y-axis, respectively. Managers with this approach are low on both people as well as the production dimension.

They impart minimum exercise or effort to get work done. This type of leader has very little concern for employee satisfaction as well as work deadlines. This results in instability within the organization. Such types of leaders are undesirable and termed ineffective as leaders.

Their primary objective is to preserve their job and seniority. Low on both people and production will result in an unwanted leader both by management and the employees.

In the case of task management or perish leadership style, the concern for the production is the highest, and concern for people is the lowest. This style is also called as dictatorial styles of leadership.

These leaders are more concerned with production and not people. This style of leadership is entirely based on theory X of Mcgregor. Employees are totally ignored, and their needs are not taken care of. They’re seen merely as a means to an end, or in this case, means for production.

The leader believes only in production and does not believe in people. He believes that it is only by the elimination of unwanted people can the organization prosper.

Increasing the output of production is the only primary concern of the leader. Such a style of leadership can increase production, but it is a short visioned goal. This results in too high labor turnover, which will not be suitable for production.

As the name suggests, this is the leadership style in which the leader maintains a balance between the people’s needs and organizational goals. Both are given equal importance so that neither should suffer. It is tried that employees are kept happy as well as production is kept balanced. However, in such cases, neither the organization nor the people are pushed to their limits.

The organization is never able to achieve its full potential under such leadership. Therefore, neither production goals nor people’s goals are fulfilled completely. Neither the organization nor the people are delighted with this type of leadership.

A very low focus on productivity characterizes this type of leadership but a very high focus on people. The people-orientation is on a high level, and the leader gives very thoughtful attention to the people’s needs.

However, similar attention is not provided to the tasks of the organization in achieving the goals. Focus is given to people to make them comfortable in a friendly working environment.

The leader believes that such a management style will motivate employees, and people will work hard on their own. There is a lot of belief in the self-motivation of their employees.

The leader believes that people will work hard on their own, and they would not require someone hovering over their head with the whip. The results of this leadership style, however, are questionable.

In this type of leadership, the concern for people and concern for production is at the highest, thereby resulting in a 9.9. There is a very high focus on people and tasks, which is classified as theory Y off McGregor.

Ideally, this is the most effective style of leadership which every leader should strive to achieve. There is trust, respect, commitment, and empowerment on behalf of a leader, which will help him to create a perfect team atmosphere.

This results in higher employee satisfaction and increased production levels. However, this being an ideal scenario, not every leader can achieve it.

Blake continued to develop the model even after Mouton’s death. In 1987, he came up with two more styles that never appeared on the grid. They are as follows:

As the name suggests, opportunistic management is for the managers who are putting themselves and their needs first. They consider themselves as important and adapt to any style they feel will bring a personal benefit for them. They manipulate their team and situation so that the outcome benefits them.

The opportunistic management style cannot be drawn on the grid because it cannot appear anywhere between the two determinants and variables of the X and Y-axis.

This type of management usually alternates between Perish and country club styles of management. The manager always knows about the team requirements, and the production demands irrespective of the styles that he implements.

If the team adapts and accepts the leader’s style, then the leader can be supportive, but the leader is not welcoming for teams coming up with their ideas. The ideas which conflict with the leader’s ideas are not welcome. The leaders usually see such things as a challenge to their position, authority, and trust.

It is essential to understand your leadership style so that you can use it to achieve your goals.

Take an example of a few recent situations in which case you were a leader. Break the situation down into the two categories of the Blake Mouton grid. For every situation, place yourself on the grid where you think you fit.

Identifying your managerial style is a crucial step because it forms the base of identifying and applying the Blake Mouton managerial grid.

Once you identify your current managerial style, which would be anything but team management style, find out the difference between where you are and where you want to be.

The difference between the two is the improvement area that you should work upon. Identify the best way to navigate from where you are to where you want to be. If you are less task-oriented, find out what you can do to be more task-oriented without disturbing your current position. Is it mentoring that you require communication with your team?

Do you have to change certain things which run in the organization, or do you want to introduce new things? If you lack people skills, then identify what can be done to improve it. Will talking to people help or listening to them help?

Is the flow of communication between you and the employees of the organization clear and straight? If not, what can be done to improve it? Such factors will help to improve your leadership style.

3. Put the grid in the context

The team management style is considered the most effective style of leadership. But there are situations when you have to attend to one specific area rather than focusing on both equally.

Similarly, suppose you are faced with economic challenges. In that case, you will have to focus more on production so that you don’t fall behind schedules and maintain your profitability as well as market share.

The manager is the greatest primarily used to assist managers who want to analyze their leadership styles. The user tool is known as a grid training tool. This can be achieved by administering a questionnaire that will help them identify their position for production and people. The training is primarily aimed at helping the leaders to achieve an ideal 9.9 mark.

It helps the readers to understand their natural styles of leadership, determine the difference between what is expected and where they are currently, and also helps to carve out a plan to go where they want to.

This model is considered as very simple compared to other models. Leadership and management is a multifaceted job, and most of those facets are not considered in this model.

The Blake and Mouton grid is an important determinant and tool to understand various leadership styles. Considering two essential elements of any organization, it describes different styles of leadership based.

These two elements are people and production (or results). The model can be used by the managers to understand their current position on the model and their expected position.